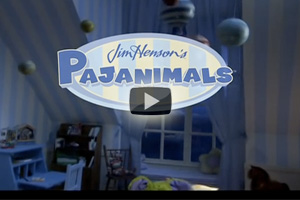 I’ve worked as a lyricist for HBO, ABC, NBC, PBS, The Family Channel, The Disney Channel, Universal, Sony, S4C (Wales), The Jim Henson Company and HIT Entertainment. Many of my songs have been recorded on four Sony and Rhino CDs. The theme song I wrote for the Canadian series Mona the Vampire has been airing for thirteen years! I am currently co-writing lyrics with Alex Rockwell for Jim Henson’s Pajanimals, on Sprout (NBC Universal). Our lullaby has gone viral on youtube with almost two million hits. Even Celine Dion is a fan – she sang it on the Today Show and said her kids couldn’t fall asleep without hearing it. I work with some of the top composers in the kids’ music world, and I was extremely lucky to collaborate on the original Madeline title with the legendary Joe Raposo.

I write grownup songs as well – I’m so prolific with my parody lyrics that I have been called the female Weird Al. If I had to do my life over (and could sing), I would be a singer-songwriter, or pound out show tunes at the piano (if I could play piano). My latest endeavor? Neurotic Parent: the Musical.